So, I thought that I had already made a post-vacation post, but when I logged onto the ol’ blog site today, I found myself mistaken. Whoops. So sorry.

Paul and I got back from Florida on the 4th (which made for a pretty anti-climactic/firework-free Independence Day, but I can deal). We had a pretty fabulous vacation. Because this is a pretty long account (with pictures!), you can read about it after the break.

Prior to actually heading to Florida, we spent a couple of days in Champaign, catching up with friends, wandering around campus, and (mainly) eating at our favorite restaurants. We hit up Basil Thai, Radio Maria, Espresso Royale, Crane Alley and Courier Cafe. Ohh deliciousness.

We were in Orlando/Kissimmee for a week and spent four days touring the parks. Monday, we went to Magic Kingdom. Neither of us had been there in years (and the last time I was there, I ruined the magic for everyone by pointing out that things were fake). It was fun to see all the things that had changed (like the addition of Captain Jack Sparrow in the Pirates of the Caribbean ride) and to just see the park on our own schedule.

Tuesday was Epcot day. While we had fun, the rides kept breaking down on us. First, Spaceship Earth stopped twice (one time was when it was going downhill backwards–already not my favorite part) during the ride. Then, Test Track stopped for quite a while before the “barrier” test. The Soarin’ ride was really quite spectacular, though a little shorter than I would have liked. We toured the world showcase, got a pretzel and a brat in Germany (though we did NOT get a Beck’s for $8.00…), watched Chinese acrobats, and watched Paul’s favorite attraction: The Carousel of Progress…. Yikes.

Wednesday was the long-awaited trip to THE WIZARDING WORLD OF HARRY POTTER (at Universal’s Islands of Adventure). While the park was entirely fabulous, it was jam-packed. It was like trying to fit everyone who would have been at the World Showcase in one day into ONE of the countries there. We waited in line for over an hour just to get into that section of the park, then had to wait in line for all of the rides and for all of the gift shops. However, as I said, it was fabulous. The Dragon Challenge ride was killer–loved it (Paul sat out). The Flight of the Hippogriff was a fun ride–a tamer roller coaster for the kiddies. The lap restraint on that was a little disconcerting, though…it only came up to the middle of my thigh. Not a fan of that. The main attraction, The Forbidden Journey, was amazing. They tell you, very vaguely, that the ride is like nothing else you’ve ever been on. They’re quite correct. There were times I couldn’t tell if I was looking at a screen and movement was simulated or if I really was moving through space while looking at the scenery. The designers did a wonderful job with the scenery on all the rides as well as with Hogsmeade in general. By 4:00, though, we had been in that section of the park all day, and after lots of sugary drinks (Pumpkin Juice and Butterbeer are both quite tasty) and some serious heat, I was feeling less than perky, so we had to leave. I’m definitely looking forward to going back (hopefully next year), and am optimistic that it will be less crowded.

Thursday, we took an unplanned trip to Disney’s Hollywood Studios (formerly MGM). It was a lovely day–not very hot at all, not too crowded (probably everyone was at HP World…), relaxing. We didn’t have to wait in very long lines, and we got to see just about everything we had wanted to see. At 4:15, we headed off to see the action/stunt show, and the dark clouds were beginning to roll in. Figuring it was just going to be the typical afternoon Florida shower, we waited it out. At 4:45, the rain started coming down, and there was some serious lightning and thunder in the distance. They cancelled the remainder of the show, and we waited in the safety of the stadium until about 5:30 when they finally kicked us out. We sought out shelter in a doorway and waited for the rain to abate…which never really happened. At 6:15, we sprinted to dinner, figuring the rain would be done when we left. At 7:45, we left dinner to find a steady drizzle. Figuring that it would be done by 9:00 for the Fantasmic night show, we headed to the stadium (buying a couple of Disney rain ponchos along the way) to wait. And at 9:00, Mickey came out and the rain began to come down even harder. And after about a minute and a half, Mickey disappeared and they announced that the show was cancelled. Laughing hysterically, Paul and I began the trek back to the car. Excellent.

We didn’t do much else before coming back home…just relaxed. Thanks to my liberal applications of SPF 50 sunblock, I’m about as pasty white as I was the day we left. And because I have nothing else to say, I’ll leave you with some pictures: 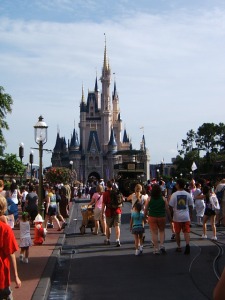 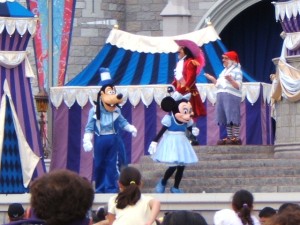 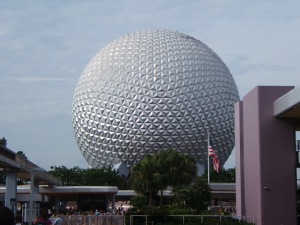 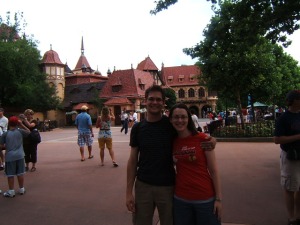 One of the 3 pictures of us from vacation.... 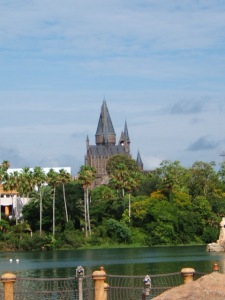 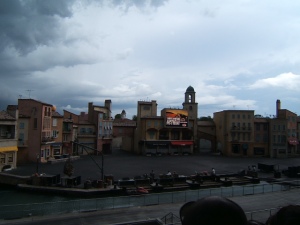 Storm clouds rollin' in over the stunt show. Last photo of vacation.